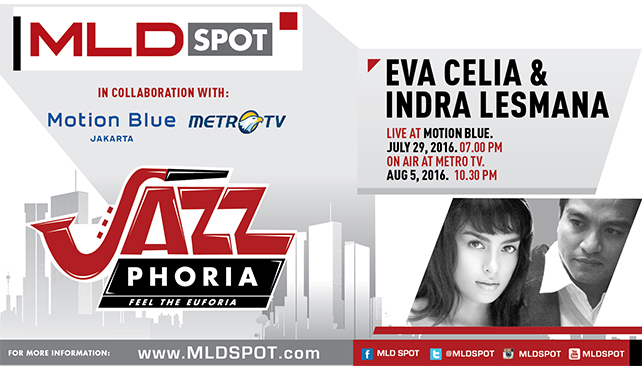 Eva Celia who was born in Jakarta on September 22nd, 1992 is an actress, singer, and songwriter. Her parents are Indonesia’s iconic jazz musician, Indra Lesmana, and singer and actress, Sophia Latjuba.  It is no wonder than that Eva inherited her parents’ artistic talent. Eva’s love and passion in music encourage her to release two singles “Reason” (2015) and “Against Time” (2016) both of which are written by Eva herself reflecting her emotions.

On July 29th, 2016, at Motion Blue Jakarta Eva Celia will perform together with her father, Indra Lesmana , preparing a blend of pop jazz that is not to be missed. Indra Lesmana is widely known as a Jazz pianist, producer, composer, and sound engineer. He is most famously known as the keyboardist for the Indonesian legendary Jazz powerhouse band, Krakatau. Indra has won numerous awards and has also toured both overseas and locally extensively playing in venues such as Blue Note Tokyo, Kuala Lumpur Jazz Festivals, Java Jazz, House of world Culture in Berlin, and many more.