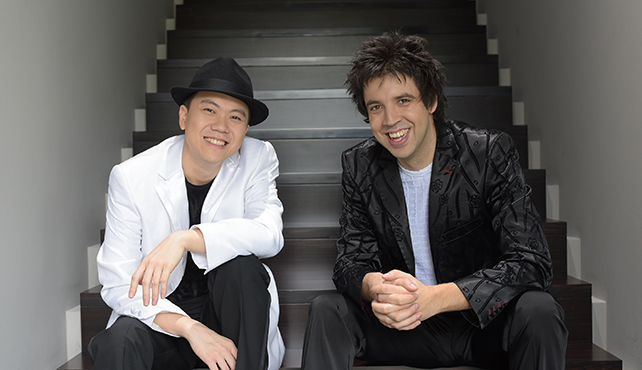 The Piano Brothers are Dominic Anthony Ferris (London, UK) and Elwin Hendrijanto (Indonesia). The pair has quickly become recognized as one of today’s most adventurous, cutting-edge piano duos, performing their own original compositions as well as arrangements of such diverse musical styles from Bernstein to Coldplay.
Dominic and Elwin met in 2009 whilst studying at the Royal College of Music in London and have since been touring regularly across the UK, Europe and Asia. Their association with Steinway & Sons began when the international piano brand commissioned them to compose the soundtrack for a new film in association with The Telegraph, “The Making of a Steinway Model B”, which demonstrates the construction process of a Steinway grand piano inside the walls of the world famous Hamburg factory.
In 2015, Dominic and Elwin featured on the million selling Elvis Presley album ‘If I Can Dream’ with the Royal Philharmonic Orchestra, topping the UK and European music charts.
In December 2017, The Piano Brothers collaborated with the London Symphony Orchestra, providing symphonic orchestrations for their signature arrangement of ‘Uprising’, originally by Muse. The collaboration will form part of a new symphonic release featuring The Piano Brothers with the LSO.

CONCERT DESCRIPTION
The Piano Brothers are delighted to be making their public debut at Motion Blue Jakarta. Dominic Ferris and Elwin Hendrijanto will be premiering some new works whilst reprising some of The Piano Brothers signature items such as their original composition, ‘Ballade For Steinway’, performed live to picture. Other works to include cutting edge two piano arrangements of Coldplay, Adele and Disney numbers along with excerpts from the recent million selling Elvis Presley album ‘If I Can Dream’ with the Royal Philharmonic Orchestra, for which they provided the piano recordings.
Watch The Piano Brothers explosive rollercoaster ride of cutting-edge duo piano playing like you have never seen before live at Motion Blue Jakarta on Saturday,  March 10th, 2018*. Enjoy a free welcome drink with every ticket purchased.  PURCHASE NOW at www.motionbluejakarta.com  or RESERVE at reservation@motionbluejakarta.com. CALL +62-21-29039189 for more info.

On March 9th, The Piano Brothers will perform a charity concert benefiting yayasan “The Learning Farm, “ that teaches organic farming and life skills for underprivileged youth (with special performance by Yohana Irawan). Each ticket will be sold at IDR1.000.000 per person. For reservation and information detail please contact pr.thelearningfarm@gmail.com

Price Includes:
•    Entrance Fee for 1 person per show
•    ONE Free glass of Welcome Drink
•    Entertainment Tax & Service Fee
IMPORTANT:
•    No refunds can be made if reservation canceled by guest.
Once payment is made through the website. You can choose to
select your seat(s). For more information and seat layout details
please email reservation@motionbluejakarta.com

•    Unpaid Reservations can only be held up to 24 hours.