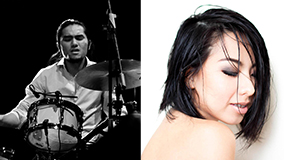 Sandy Winarta is Indonesian jazz drummer, he finished his study at Institute of Music in Sydney. He was performed at international jazz festivals, jazz fest, jakjazz fest Indonesia, Mosaiz Jazz Festival Singapore, and many other. he also colaborated with International musicians such as Sadao Watanabe, Steve Thornton, Roger Burns, Andy Suzuki, and local Jazz Musician such Indra Lesmana and Barry Likumahuwa.

Amelia Ong finished her study at the WesternAustralian Academy of Performing Arts (WAAPA) in 2009 as Bachelor of Music, majoring in Jazz Performance.She has now developed a concept for herself with wide repertoire of jazz  standards and her love of world music, which gives her a “new age” edge both in her compositions, arrangements, and performances.