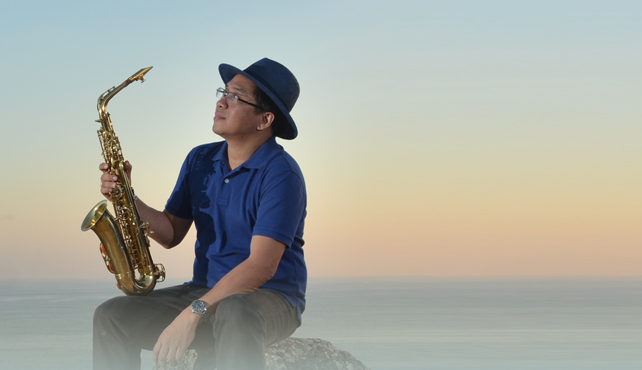 Devian Zikri is one of Indonesia’s leading Saxophonist player. He earned his music degree from Berklee College of Music in Boston, USA. He has already released four Smooth Jazz albums. Devian learned music since the age of 14 with guitar as his first instrument. Devian love of music grew and started playing in café’s and restaurant at the age of 20. Fascinated by the late great Indonesian Saxophonist, Maryono, Devian learned saxophone at the age of 23. At the age of 26, Devian went to Berklee College of Music in Boston and spent four years learning jazz and graduated with the honorary magna cum laude.

Upon returning to Indonesia he immediately gains recognition and since then he’s been playing with local top musicians such as the late Ireng Maulana, Purwa Caraka, Bubi Chen, and many more. In 2002, he released his first album and was nominated by AMI Awards as the best Jazz album of the year. In 2007, Platinum records sign Devian as their first jazz instrumental artist. In 2008, his first album by Platinum “Freedom of a dream” sold over 12.000 copies across Indonesia. His second album with Platinum records in 2012 “Morning Glance” receives nomination from AMI awards also as the best jazz single of the year (The song ‘Andai Saja’). In 2014, his third album “I Love You” received rave reviews and was selected as one of the album that Indonesian jazz fans add to their collection. Devian has played as a soloist with known local artists such as Afgan, Dina Mariana, Utha Likumahuwa, Vonny Sumlang, Syaharani, Kerispatih, Toni Q, Kemala Ayu and many more. His latest album titled “Hope and Dreams” was released on February 2018.